The MaxLifespan module serves for the GIS-based prioritization of river restoration features based on lifespan and design maps and it creates rasters, shapefiles, and pdf-maps. This Wiki page is structured as follows:

Maximum lifespan mapping uses lifespan maps produced with the LifespanDesign to identify the feature(s) with the highest lifespan for every pixel within the predefined feature groups. If the maximum pixel lifespan can be obtained by several features, the MaxLifespan module overlays polygons indicating the best feature types. For terrain modifications, all relevant features (grading, widening/berm setback, backwater enhancement as well as side channel or side cavity creation) are equally considered. Thus, the planner has to decide and manually manipulate feature polygons which are relevant for the particular project. Regarding toolbox features, the MaxLifespan module evaluates plantings against wood (engineered log jams) and angular boulders (rocks) placement to increase habitat suitability and stabilize terrain modifications. The user has to decide, which plantings, wood or angular boulders (rocks) polygons are relevant to keep for the final version. Finally, the MaxLifespan module uses complementary feature lifespan and design maps as well as terrain slope analysis to highlight areas where gravel augmentation, the incorporation of fine sediment in the soil and bioengineering features for terrain/slope stabilization are relevant. Also in this last step, the planner needs to decide, which feature polygons to keep. However, if the analysis of complementary features identifies unstable slopes, it is strongly recommended to take action in the concerned areas. 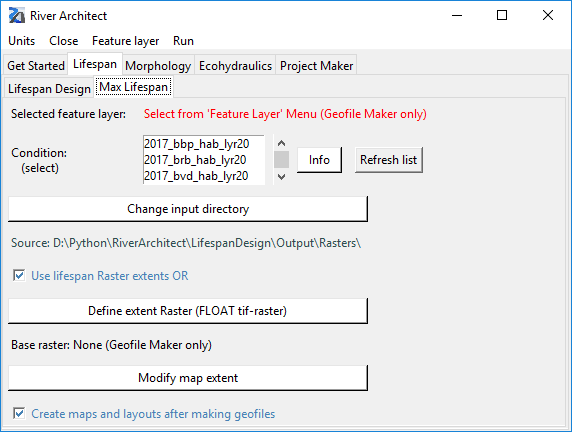 First, the module requires the choice of a feature set from the dropdown menu. Second, a CONDITION needs to be defined analog to the LifespanDesign module.

By default, the MaxLifespan will look up lifespan and design maps which are stored in the folder RiverArchitect/LifespanDesign/Output/Rasters/CONDITION/. This input directory can be modified by clicking on the Change input directory button. The MaxLifespan will automatically look for Raster files beginning with “lf” or ds and containing the shortname of the considered features (see shortname list in the feature group overview). Please note that Raster names that do not start with either lf or ds and/or that do not contain the complete shortname of the considered features are not recognized by MaxLifespan. The background image of the maximum lifespan maps also refers to lifespan and design maps and corresponds to the Raster RiverArchitect/01_Conditions/CONDITION/back.tif.
The mapping checkbox provides the optional creation of maps with the creation of geofiles (Rasters and shapefiles). If the checkbox is selected, running the Geofile Maker also includes the successive runs of the Layout Maker and Map Maker. It is recommended to keep this box checked (default) because maximum lifespan mapping is fully automated and the procedure is fast.
Once all inputs are defined, click on “Run” and “Verify settings” to ensure the consistency of the chosen settings. After successful verification, the selected feature list and the verified condition change to green font.
Three “Run” options exist in the drop-down menu:

The principal run options of the GUI call the following methods:

For batch-processing of multiple scenarios, it can be useful to run the geo_file_maker function in a standalone script as follows:

The principal output of the module’s Geofile Maker is one Raster called max_lf (stored in .../MaxLifespan/Output/Rasters/CONDITION/) and one shapefile per analyzed feature containing polygons of the feature’s best performing areas (stored in .../MaxLifespan/Output/Shapefiles/CONDITION/). Moreover, the module produces Rasters with names corresponding to the lifespan/design Raster names and feature shortnames, which essentially contain the same information as the feature shapefiles. These Raster files are side products from the production of the feature shapefiles.

The module enforces overwriting of existing Raster and shapefiles in the output folder (/MaxLifespan/Output/) and it tries to delete any existing content. Before running Map Maker, the layout templates are stored in RiverArchitect/02_Maps/templates/river_template.aprx and they are named after the feature set type. The mapping wiki pages provide a list of layout names and explain possibilities for modifying the symbology, legend, or map extents. After running Map Maker, the map project file and PDFs are stored in RiverArchitect/02_Maps/CONDITION/map_CONDITION_design.aprx. Anew modifications should be made within this project file (.aprx), which is not overwritten, if River Architect identifies an existing CONDITION-project file.

The GUI can be closed via the Close dropdown menu if no background processes are going on (see terminal messages). The GUI flashes and rings a system bell when it completed a run task. If layout creation and/or mapping were successfully applied, the target folder automatically opens. After execution of either run task, the GUI disables functionalities, which would overwrite the results and it changes button functionality to open logfiles and quit the program. Logfiles are stored in the RiverArchitect/MaxLifespan/ folder and named logfile.log. Logfiles from previous runs are overwritten.

The comprehensive MaxLifespan module provides flexibility regarding input directories, layout modifications and mapping extents without modifications of the code. However, modifications of the feature sets (framework, toolbox and complementary) require code modifications. The relevant python classes are in the file cFeatureActions.py, notably class FrameworkFeatures(Director), class ToolboxFeatures(Director) and class ComplementaryFeatures(Director). These classes all inherit from the Director class which identifies and assigns lifespan and design Rasters in the input folder. The following code example indicates where single features can be added or removed from feature sets. It is a generalized code sample where “Framework”, “Plants”, “Other Bioengineering” and “Longitudinal connectivity” are replaced with “TYPE”. The feature FullName_i and shortname_i must comply with the feature terminology because also the MaxLifespan module uses the centralized feature identifier class that is stored in RiverArchitect/ModifyTerrain/cDefinitions.py.

In addition, the choose_ref_layout(self, feature_type) function of the Mapper class in RiverArchitext/.site_packages/riverpy/cMapper.py needs to be updated:

Moreover, the choose_ref_map(self, feature_type) function of the Mapper class in RiverArchitext/.site_packages/riverpy/cMapper.py needs to be updated: